Save $250CAD Per Person - Classic Turkey

Save $250CAD Per Person - Classic Turkey with Goway

(Price is per person based on twin/double, subject to availability and current exchange rates. Pricing reflects a discount for departures on October 21, 2022.) 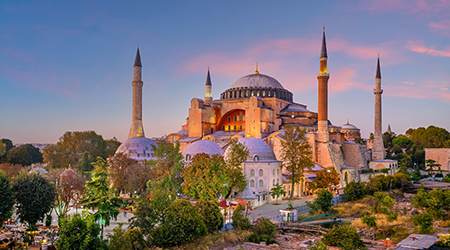 Photo: Beautiful view on Hagia Sophia in Istanbul, Turkey from the top view at sunset

On this 10-day program to Turkey, you will start in Istanbul, the vibrant capital city that lies between two continents.  Next, see the unique moonscape region of Cappadocia and its fairy chimneys.  Finally in Izmir, discover a beautiful landscape of modernity and history, nestled along 629 kilometers of stunning coastlines.

Panoramic Sea of Marmara views can be admired from the rooftop terrace of Radisson Hotel President Beyazit Istanbul. It is in the heart of Istanbul, 100 yards from the Grand Bazaar. The Hotel's modern rooms are soundproof, have a contemporary decor and offer views of the historic city.

Drive to old town and visit Hippodrome Square, the scene of Chariot races and the center of Byzantine civic life. Then visit Blue Mosque, built in early 17th century and known as Blue Mosque because of its magnificent interior decoration with blue Iznik tiles. Continue to St. Sophia Museum, the world's largest church for many centuries and today is the fourth largest one. After lunch visit Topkapi Palace, built by Sultan Mehmet II after the conquest of Istanbul in 15th century. The palace housed the sultans and their exotic entourage until mid-19th century. After having served as a mosque for 481 years, the building become a museum in 1934 by the order of Ataturk, the founder of the Republic of Turkey. Today the museum displays priceless collections of the imperial treasury, numerous pieces of Chinese porcelain, traditional costumes of the sultans and their families. Last stop will be at famous historical Grand Bazaar, the largest "souk" covered oriental shopping mall in the world, where you will find 4,400 shops under one roof where each trade has its own street.

Our final stop, Hagia Eirene, the Church of the Holy Peace, is one of the few churches in Istanbul that was never converted into a mosque, as it was used as an arsenal until the 19th century. Hagia Eirene reputedly stands on the site of a pre-Christian temple and has the distinction of being the first church built in Byzantium as it was converted into the capital of the Eastern Roman Empire. From there, we visit Gulhane Park, once a part of the outer gardens of Topkapi Palace, where the Edict of Gulhane, a declaration of rights and liberties that played an essential role in the modernization of the Ottoman Empire. After the proclaimation of the Republic, Gulhane Park was for many years home to the Istanbul Zoo.

Perissia Hotel is a 4-star property situated in the town of Urgup known for its buzzing nightlife, with a variety of bars and restaurants and its history and unique landscapes. Urgup is located in the central historical region of Cappadocia, near the Cave Churches of Goreme (10km). The hotel offering panoramic views of the town, an outdoor pool surrounded by lawn and terraces perfect for relaxation. The hotel's decor and rooms are blended by comfort and convenience with simplicity and neutral colors. Just 45 minutes drive from Nevsehir Airport and a 15-minute drive from Goreme National Park - where you will find the famous sites such as Three Beauties rock formations, Open Air Museum (Lovers Hill), and Devrent (Imaginary Valley).

Meal Plan: Half board (breakfast + dinner)

Your first stop will be the Devrent Imagination Valley where you will walk through this lunar landscape. Then visit Pasabag, also know as Valley of the Monks, it is one of the most popular areas in Goreme with its mushroom-shaped fairy chimneys and rocks. Next stop is Uchisar Rock-Castle, the highest point in the region, which gives you a spectacular panoramic view of Goreme valley and Goreme Open Air Museum which consists of steep cliffs and many hidden churches dating from second half of 9th century. Continue to visit the villages of Avanos. It is a small town famous for its pottery. It is built along the banks of Kizilirmak (Hayls River), the longest river originated and ending within the borders of Turkey with 842 miles of length. Those who want may also enjoy famous "testi kebab" as well, the traditional kebab in the Cappadocia region. 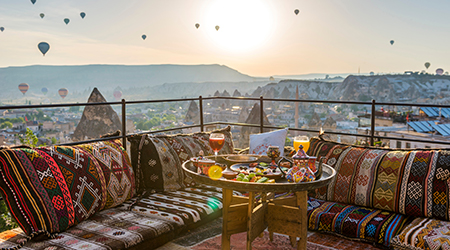 Kayseri to Izmir: One way flight

The Best Western Hotel Konak, with its 80 standard rooms and 4 suites, offers you the completion of all your needs for modern life. The Meltem Restaurant, overlooking a magnificent view of Aegean Sea, offers a rich selection from Turkish and international cuisines. At the end of the day visit the warm atmosphere of the Bora Bar, it is the ideal meeting place for music and drinks. The Best Western Hotel Konak is located in the city center, which is within walking distance to the shopping and business districts of Izmir.

Today you will visit Ephesus, the cradle of early Christianity. On this tour, you will visit the House of The Virgin Mary where she supposedly spent her later days. Proceed to Ephesus and see the spectacular ruins from the period of St. Paul, some of which have only recently been excavated. See the Odeon, the Bouleterion, Fountains, the Temples, the Brothel, the Library, the Agoras, the Great Theatre, the Roman Baths, the Gymnasiums. After lunch, visit the Temple of Artemis. The Temple of Artemis or Artemision, also known as the Temple of Diana, is a Greek temple dedicated to the goddess Artemis. The temple was completely rebuilt twice, once after a devastating flood and three hundred years later after an act of arson; it now stands today in its final form as one of the Seven Wonders of the Ancient World.

Price is per person based on twin/double, subject to availability and current exchange rates. Pricing reflects discount for departures on October 21, 2022. Savings listed are the total savings per person based on twin/double occupancy. Airline taxes, if applicable, are included. Please enquire about departures from other cities, single supplements, extensions or upgrades.

Constantly evolving to keep ahead in one of the world’s most dynamic industries, Goway offers the utmost professionalism, with a personal touch.