Explore the Arctic or Antarctica and Save

Explore the Arctic or Antarctica and Save with Encore Cruises 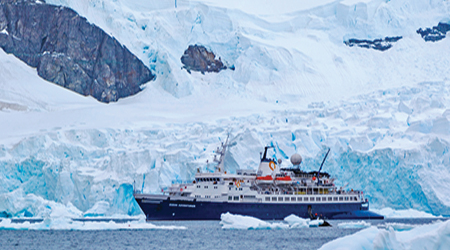 Leader in polar-based adventures, Quark Expeditions offers more off-ship adventures than anyone else. Take your expedition to the next level by exploring Antarctica in a once-in-a-lifetime camping escapade!

Quark Expeditions operates more ships in the polar regions than any other operator. They’ve spent the last three decades taking travellers to remote parts of the Arctic and Antarctic. Since their first tourist transit in 1991, they’ve continued to deliver industry-breaking firsts, from the discovery of the Emperor penguin rookery at Snow Hill Island to the launch of their new ship, Ultramarine, designed to go beyond and discover new places. 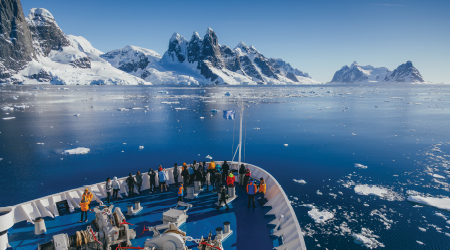 Photo: Passengers enjoying the views of the Arctic

The rugged, remote Arctic remains one of the most unexplored domains on the planet. This ice-covered region encompasses the High Canadian Arctic, Greenland, the Norwegian archipelago of Svalbard, Russia, and at the very top of the earth, of course, the North Pole. It’s inhabited by polar bears, arctic foxes, beluga whales, reindeers, seals, walruses, and migratory birds, among other wildlife species. Experience 24-hour daylight that illuminates the fjords, glaciers, and landscapes of the Arctic, providing ample opportunities to appreciate its beauty, day or night. 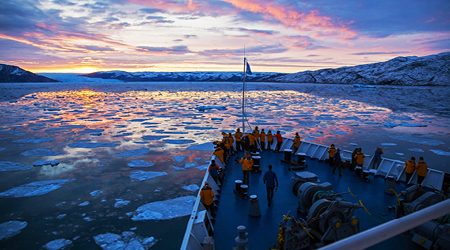 Antarctica, at times an unforgiving continent marked by harsh temperatures and rugged terrain, is home to a rich diversity of wildlife that inhabits the glaciers, mountains, bays, fjords, bays, pebble beaches and rugged coastlines. The Antarctic Peninsula is abundant with minke, humpback, right, blue, and killer whales and the Weddell Sea is the site of one of the world’s largest colonies of Emperor penguins. Crossing south across the Antarctic Circle is a milestone experienced by only a few polar travellers and an unforgettable experience.

*Offer is applicable to new individual bookings made between April 1 and June 29, 2022. *Valid on all sailings as follows: Arctic: May 2022 – September 2023; Antarctica: October 2022 – March 2023. 1. Early Booking Bonus up to 25%. Promo codes: PROMO25S, PROMO20S, PROMO15S or PROMO10S for 25%, 20%, 15% or 10% savings respectively, in a standard stateroom; PROMO25P, PROMO20P, PROMO15P or PROMO10P for 25%, 20%, 15% or 10% savings respectively, in a premium stateroom. Offer is combinable with Shackleton Club offers. Offer is not applicable to Transfer package, Adventure options, additional hotel accommodation, pre/post tours, insurance, flights and group bookings. 2. Guests will receive an additional 10% discount if full payment is received no later than 30 days after reservation. Offer is subject to availability, capacity controlled and may be withdrawn at any time without notice. Other restrictions may apply. All references to Quark Expeditions are: © 2022 Quark Expeditions. All rights reserved. For full terms and conditions, please contact your travel advisor.